This is the program presented at the press conference in the Berlanga Hall of the SGAE Foundation by Montserrat Santalla Gasco, President of the New Filmmakers Platform; Giulia Altares Medina; screenwriter, festival jury and member of the Board of Directors and the Board of Directors of the SSAE; Ines Paris Bouza, screenwriter and film director, Festival Jury Member and Institutional Director of Audiovisual at the SGAE Foundation; Daniel Guzmán, actor and director from Madrid and member of the jury, and José Luis García Sánchez, Spanish director who received the “Dedication…” award in this edition. 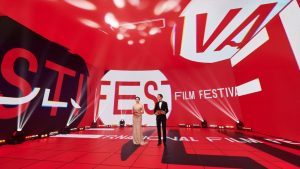 About 200 films (33 feature-lengths and 156 shorts), over 100 premieres, 42 nationalities and nearly 80 hours of films with free admission (excluding Cine Doré) and for any audience – these are the numbers for this release. The “Official Feature Film”, “Short Film” and “PNR Partner Sections” showcase 65 Spanish-produced contemporary films and compete for nine awards to be announced on October 24 at 21:00 during the closing ceremony.

The parallel section “International Mirada Award” will present almost the entire filmography of the Romanian director Corneliu Porumboiu, including the premiere in Madrid of the film “Comoara/Treasure” (One Talent Award in Cannes 2015), screenings of “El Second Game”, “East of Bucharest” or his last short films. This section is held in collaboration with the Romanian Cultural Institute, Cineteca and Film Academy and with the support of Acción Cultural Española (AC/E) through its Program for the Internationalization of Spanish Culture (PICE) in the Visitors category (the latter also supports the Parallel Section of New International Filmmakers).

Also, thanks to the support of the Spanish Film Library, there will be an exhibition “Tribute to José Luis García Sánchez”, presenting 12 of the most relevant works of this director from Salamanca from 1978 to 2008, such as “Las truchas” (1978). , winner of the Golden Bear for Best Film), the musical La corte del faraón (1985, co-written with Rafael Ascona and winner of the Silver Shell for Best Director) or some of his short films.

In addition, there will be meetings with directors in different locations: Corneliu Porumboyu at the Romanian Institute of Culture and Barbara Pestan, Carolina Campo Lupo and Fernando Molnar at La Central de Callao.

In order to support the development of Spanish audiovisual production and distribution, the Platform for New Filmmakers (PNR) is considering prizes of more than 12,000 euros in addition to other additional materials and services, as well as maintaining selection fees in the Official Feature Film. Sections of films (300 euros) and short films (100 euros). This gives more filmmakers the opportunity to receive a small financial contribution, which they will definitely direct towards their next project.