The 30th Madrid Film Festival (FCM-PNR) is coming with the aim of being a new window for the animation film exhibition, very fruitful in our country, and will celebrate the 1st FCM-PNR Animation Conference in cooperation with the community. Madrid and Pixel Cluster Madrid. This will be an animated film event that will feature exclusive images and previews of several animated films produced in collaboration with Spain and Portugal, including Trueba and Mariscal’s new animated film, which is in full production.” shot the pianist. A session in which the Spanish Film Academy and the Portuguese Film Academy will take part.

In addition, a large selection of animated short films will be shown in the official section before feature films.

This year, a national tribute is paid to the TVE Días de Cine program, which is also celebrating its 30th anniversary, a unique milestone in our television network as well as beyond. The program team, led by director Gerardo Sanchez, will receive the award for one session that will show the program’s first broadcast. It will take place at the Sinetek cinema on October 6, exactly on the day of the 30th anniversary of this first broadcast and will coincide with the Day of Spanish Cinema, which is celebrated for the first time in our country.

In order to attract and promote new future professionals, the Madrid Film Festival is also announcing the 1st Children’s Film Competition by Children, the first edition of which will focus on sustainability and the city of Madrid as a keynote on 1 November, World Ecology Day, with the launch of its bases.

Also with a focus on children’s eyes, the first year of the Madrid Film Festival (FCM-PNR) will have a children’s jury in the section of CINE MOLÓN dedicated to the little ones, an initiative made possible by the collaboration between La Cinema Barracks and COOFILM.

Movie poster and new figurine.
Poster for the 30th Madrid Film Festival (FCM-PNR) designed by Cristina Ramallo. It takes us back to the 90s, when the Madrid Film Festival was born, and is inspired by the iconic images of our cinema. In it, the Bear of Madrid conquers the city with a Super 8 camera in hand in a place that takes us to a mythical scene from Alex de la Iglesia’s Day of the Beast. And it does so from the only hotel in Madrid that has a cinema, the legendary Capitol cinema.

In addition, for 30 years, the Madrid Film Festival (FCM-PNR) has been presenting a new physical award. This is the Star of Madrid, a new statue specially designed by two members of the Platform for New Filmmakers, Violeta Barca-Fontana and Ana Solano, that will be presented to award-winning filmmakers in this and future editions. 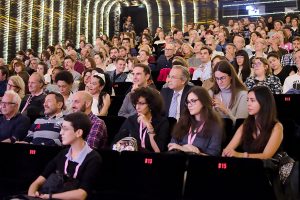 The jury this year included: