which is also celebrating its 30th anniversary, a unique milestone in our television network as well as beyond. The program team, led by Gerardo Sanchez, its director, will collect the award in one session, which will show the first broadcast of the program. It will take place at the Sinetek cinema on October 6, exactly on the day of the 30th anniversary of this first broadcast and will coincide with the Day of Spanish Cinema, which is celebrated for the first time in our country.

The meeting will take place at the Sala Azcona in Matadero at 20:30.

On March 9, the Council of Ministers decided to establish October 6 as a DAY OF SPANISH CINEMA, in order to recognize the role of filmmakers, their influence and importance in the cultural and social life of our country, as well as the value of the heritage of our cinema and its decisive role in creating our identity and common imagination. Thus, from the Ministry of Culture and Sports, through the Institute of Cinematography and Audiovisual Arts (ICAA), all institutions, organizations and participants in the cinema value chain have been invited to join this first edition of the Day of Spanish Cinema and New Filmmakers. 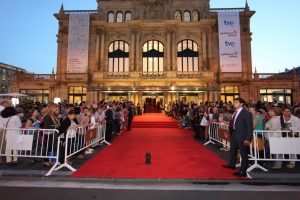 Platform and the Madrid Film Festival we will join the program with the celebration of our traditional NATIONAL TRIBUTE of the Festival. This year, on the 30th anniversary of our cinematic event par excellence, we will pay tribute to the TVE DÍAS DE CINE programme, which, like the festival, is celebrating its 30th anniversary. During the event, which will take place at the Sala Azcona in Matadero, PNR President and Festival Co-Director Sonia Bautista Alarcón will present Gerardo Sánchez, current Program Director, with the ESTRELLA DE MADRID award. (recently established by the festival organization as a badge and unique award). In addition, since the first program of DIAS DE CINE aired on October 6, 1991, this first program will be screened in a cinema at the event. The act will end with a review of the history of the program, a special memory of Antonio Gasset and a few more surprises.

The fixed date, October 6, was chosen because it corresponds to the official end date of production of This Happy Couple (1953), an emblematic film written and directed by Juan Antonio Bardem and Luis García Berlanga, two of the great talents of our cinematography, and hosting the participation of performers such as Elvira Quintilla, Fernando Fernand Gomez (who plays film technician), Lola Gaos or José Luis López Vasquez. In addition, 2021 and 2022 marked the centenary of five of the aforementioned figures, all but Quintilla.

There will be more than 250 national and international events organized by institutions and organizations related to the world of cinema. About 100 countries will join this celebration with 50 embassies, 40 Cervantes institutes and 18 Spanish cultural centers abroad, autonomous communities, film libraries, film academies and the main Spanish film festivals. 246 projections, audio-visual literacy classes in more than 30 educational centers.