The community of Madrid presents the new season of Teatros del Canal with 90 performances and great international figures.

The Community of Madrid today unveiled the new season of Teatros del Canal, an ambitious, eclectic and comprehensive proposal, marked by the presence of great figures from the international scene, and aiming to satisfy all tastes and audiences. The program of nearly 90 shows will run from September 2022 to June 2023.

The regional flagship of the performing arts, which is the cultural center of Spain, will offer 32 dance productions, 22 theaters, five musical theatres, one documentary theatre, 22 concerts, four operas, two performances and a poetry concert, including 59 premieres, of which 23 will be absolute , 21 in Spain and 15 in the Community of Madrid.

In her speech, the Minister emphasized that the new season of Teatros del Canal represents “the most luminous commitment to the performing arts at the highest level, from self-produced shows to the most avant-garde national and international offerings that converge in Madrid where they dance.” , music and theater catch their audience.”

“With this poster that we present today, the Teatro del Canal further positions our region as the epicenter of Spanish and European culture, as well as a reference point for countries that admire us across the Atlantic. It is a real luxury to be able to count on such an outstanding technical and artistic team, which, in addition, already works under the close leadership of its director,” added Rivera de la Cruz.

The theater section will meet the big names of the national scene, such as Paco Mir, one of the masters of comedy in Spain, who opens the season by giving life to Lope de Vega’s classic play “El perro del Ortelano” in a metatheatrical version. which speaks of the difficulties of itinerant companies. 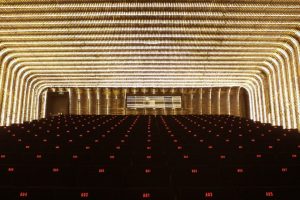 Martha Pasos, Christina Rosenvinge and Maria Folgera meet on stage for the first time in Sappho, a visual, musical and stage poem that spans the universe of the great poet from Lesbos. For their part, Andrés Lima, Santiago Losa and Eduard Fernandez will join forces in all love songs where oblivion, memory and love go hand in hand through a man who sings in memory of his sick mother

Planned works include adaptations by Cyrano de Bergerac as well as Madame Bovary and Aunt Julia and the Writer. On the other hand, the works of the bands Colectivo Fango and José and their sisters will be shown. And the hit Ladies Football Club will return, director Sergio Peris-Mencheta’s latest show about the origins of women’s football.

Turning her gaze to Latin America, Marianella Morena will take the viewer to the sexual exploitation of teenagers in Uruguay with the help of a Leather Doll, while Carolina Roman will open a window into the universe of affective connections with Amaeru, a tribute to her Argentinean roots. Also Argentinean Erica Rivas is adapting Ariana Harwich Matate’s novel Love.